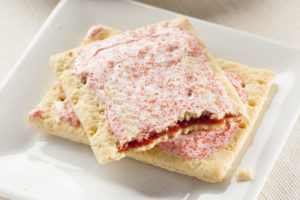 A lot of frivolous lawsuits are filed each year, and you may have read about some of them here on this site. However, there sometimes comes along a lawsuit that seems so ridiculous that it’s hard to believe. This happens to be one of those cases. Let’s get a look at what happened with this case.

We all know and love (or hate) Pop-Tarts. They are good right out of the package or toasted, and when you eat one of these treats, you have a good idea of what you are getting. It’s pastry, filling, and sometimes frosting. You don’t look at strawberry Pop-Tarts and think that you are going to be getting the equivalent of a big bowl of strawberries.

However, Kelvin Brown filed a lawsuit in September of 2020, saying that the box of Pop-Tarts is misleading. He claimed that the labeling makes people believe that the fruit filling only contains strawberries as its fruit ingredient. However, it’s not just strawberries in the Pop-Tarts. It’s also pears and apples that help to make up the filling. This was thought to be deceptive.

Fortunately, others could see that this case didn’t have much merit. A federal judge in New York dismissed the case. The judge wrote in his decision, “No reasonable consumer would see the entire product label, reading the words ‘Frosted Strawberry Pop-Tarts’ next to a picture of a toaster pastry coated in frosting, and reasonably expect that fresh strawberries would be the sole ingredient in the Product.”

Not Enough Strawberries In Pop-Tarts

Strawberry Pop-Tarts aren’t getting off that easily, though. Anita Harris in Illinois filed a lawsuit against Kellogs saying that the company leaders tried to give the impression that the fruit filling contains a “greater relative and absolute amount of strawberries than it does.”

Harris said that many people are eating more strawberries because they have a lot of nutrients and are a good source of vitamin C. She said that the company was engaging in false advertising. The suit follows the first one in that it also talks about the other ingredients that are used in the filling, not just strawberries.

Harris also accused the company of using artificial food dye Red 40 to give the food a red appearance to make it look more like strawberries, further fooling consumers. She said that the company doesn’t mention the addition of the coloring anywhere except on the ingredient list, which some people won’t read. She claims that reasonable consumers “must and do rely on a company to honestly identify and describe the components, attributes, and features of the product.”

However, most other food products don’t put their list of dyes front and center on the box either. They are, however, listed with the rest of the ingredients where they should be.

Unfortunately, most of the lawsuits are bogus. They aren’t about making things right. Instead, they are about plaintiffs and attorneys who are looking for a payday or for attention. Still, there are some cases where companies do need to be held accountable for their actions.

These outrageous cases are a problem because it means that when there are serious cases of false advertising, bait and switch, etc., the cases come across as being frivolous. It’s like the story of the boy who cried wolf.